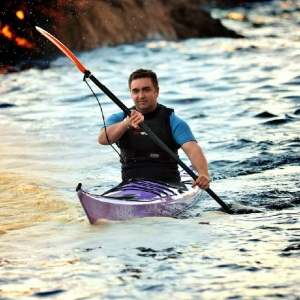 Please remember that sharing this trip will make it public.

After a delayed start we got underway late and this meant that once we had rounded Dunnet Head it was an extremely arduous journey against some strong eddies and currents. This meant extremely slow progress. Conditions around the head itself were predictably choppy. There was a significant northerly swell on the east side and a north going stream which meant at times we were struggling to make 1Mph as we headed into the more sheltered water. As a result it took bloody ages to get there. Fiona decided to go ashore at the end of her garden in Scarfskerry and then cycle to Gills to collect her car, which was extremely helpful in the end. I couldn`t resist an attempt at rounding St Johns Head and completing my mission despite the fact I was an hour late to go through the Merry Men. I knew it would be a long shot, but after a valiant battle which ended in a draw, it was clear that I was making no progress despite the fact that I could see the clear water only a few metres ahead. So, the only thing to do was to turn back and go ashore at the castle. After the long slog against the tide I was already tired before I did battle with the Merry Men, but afterwards I very nearly found myself for the first time at the limit of my extremely respectable endurance. It was a great learning day and I think we both gained plenty, but from all the effort I am now beyond the point of achy. So much so that every atom of my body is sore, and five minutes ago I pulled my hamstring simply by breathing. All in all today was very little fun but a great bit of experience. I might take a week off the sea after this one!

There is currently no location data. This page will automatically update when tracking begins. 60

If you work or play on the water then download Splash 365 now!
x